Introduction to the Service Desk module

Introduction to the Service Desk

Wizdom Service Desk provides an intuitive ticketing system for internal operations. This enables employees to initiate and handle internal inquiries and concerns, such as office supply requests, IT issues, and all other employee queries, from the intranet.

The Service Desk from the user’s perspective

Entering a service desk landing page, users will be presented to an overview with tabs to access a list of, respectively, tickets in progress and closed tickets. From this overview, users can, also, submit new requests. 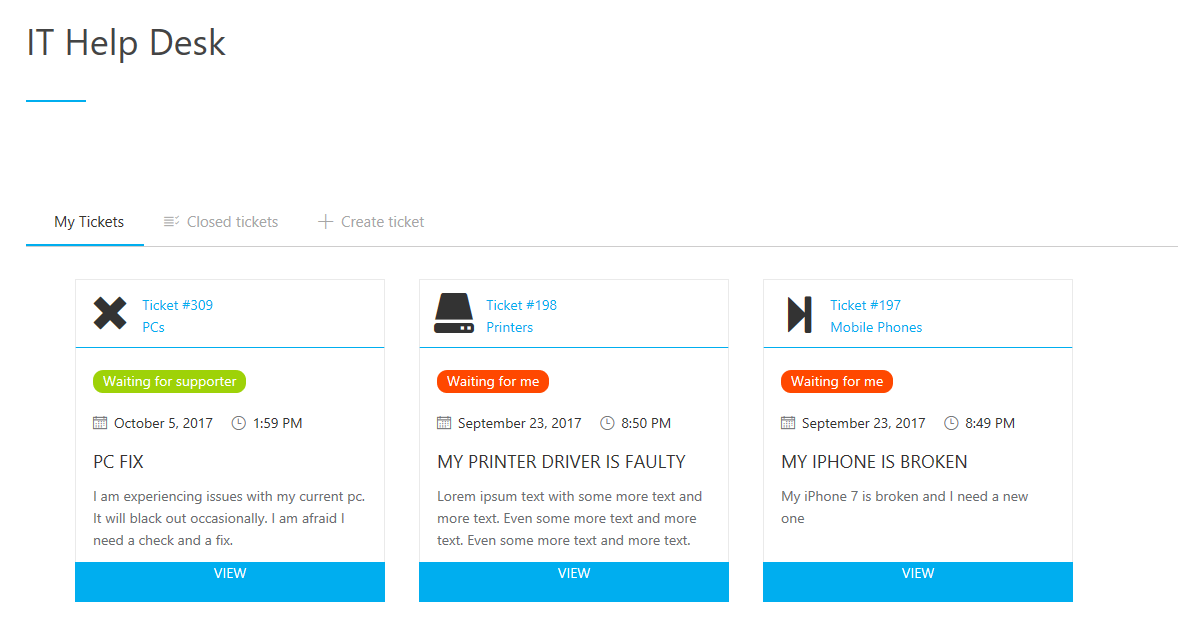 Example of a user’s overview of own tickets in progress.
Submitting a Request

1) When clicking “Create ticket”, the user can choose between categories defined for the service desk. 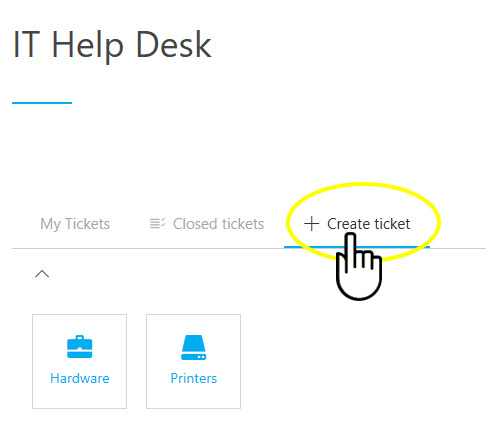 2) Clicking on a category will lead to a number of fields that will guide the user to provide the supporter with the appropriate information. Most of these fields are mandatory for the module and its processes. In addition to these, administrators can create fields to be used for specific service desks.

3) The field “Receive email when status of your ticket changes” is ticket per default. When ticked, the user will receive email notifications when a supporter comments the case, provides a solution for the case, or changes state of the case. 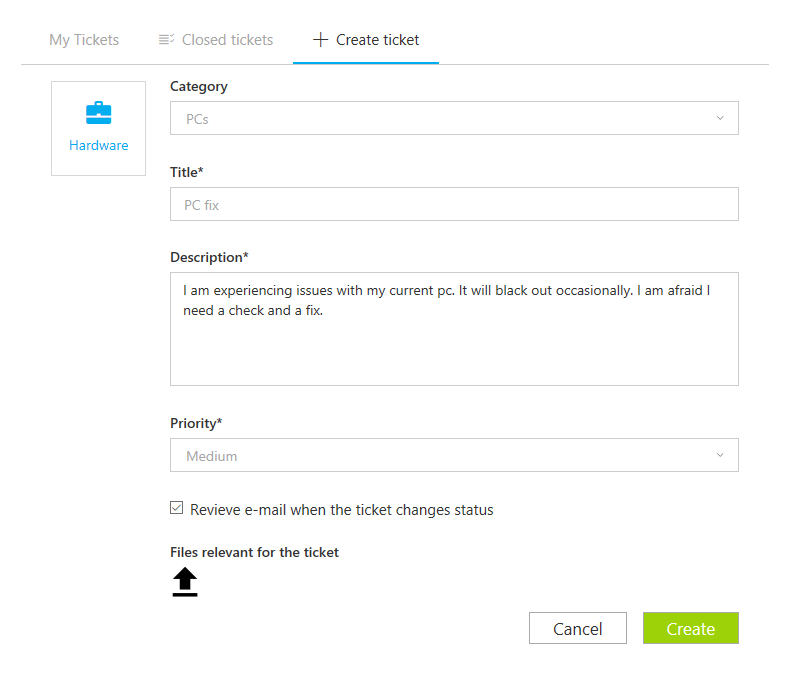 Wizdom Service Desk allows the user full insight to his or her request.

For each ticket, the user has access to an overview of the ticket with details like assigned supporter, ticket state, relevant files, comments, and proposes solution to the ticket. 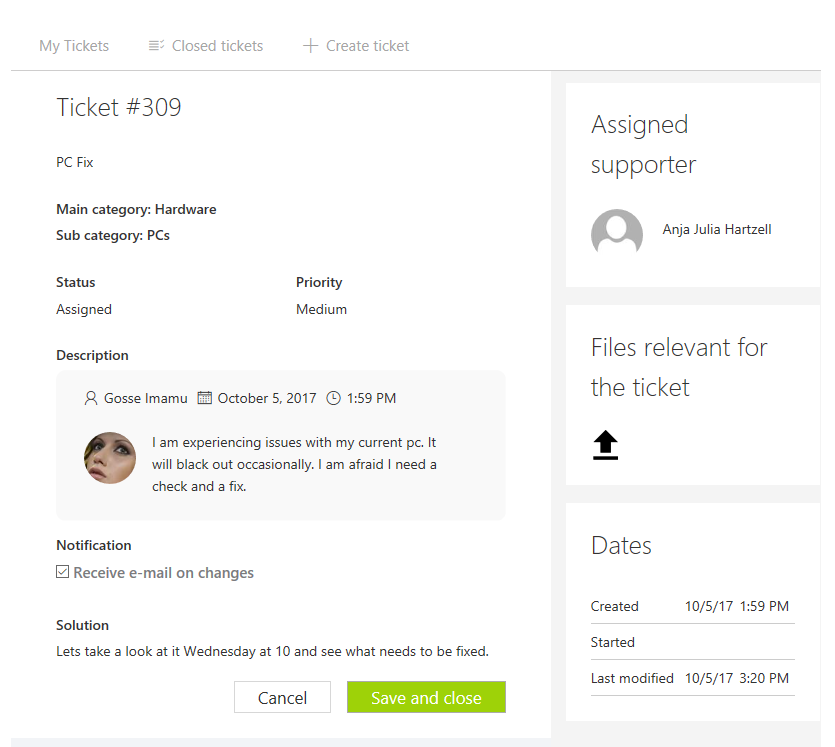 Example of user’s overview of a ticket.
From this overview, the user can perform actions like adding new attachments or comments as the case evolves. 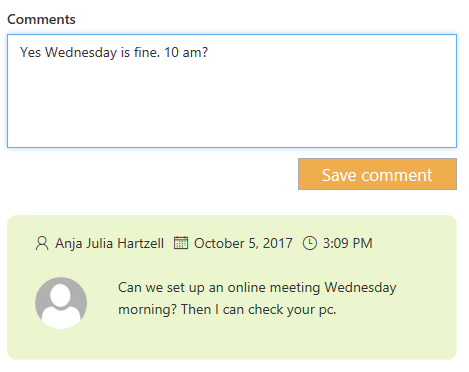 When a supporter set the state of a ticket to “Ready to close”, it enables the user, who created the ticket, to close it from the ticket’s overview. 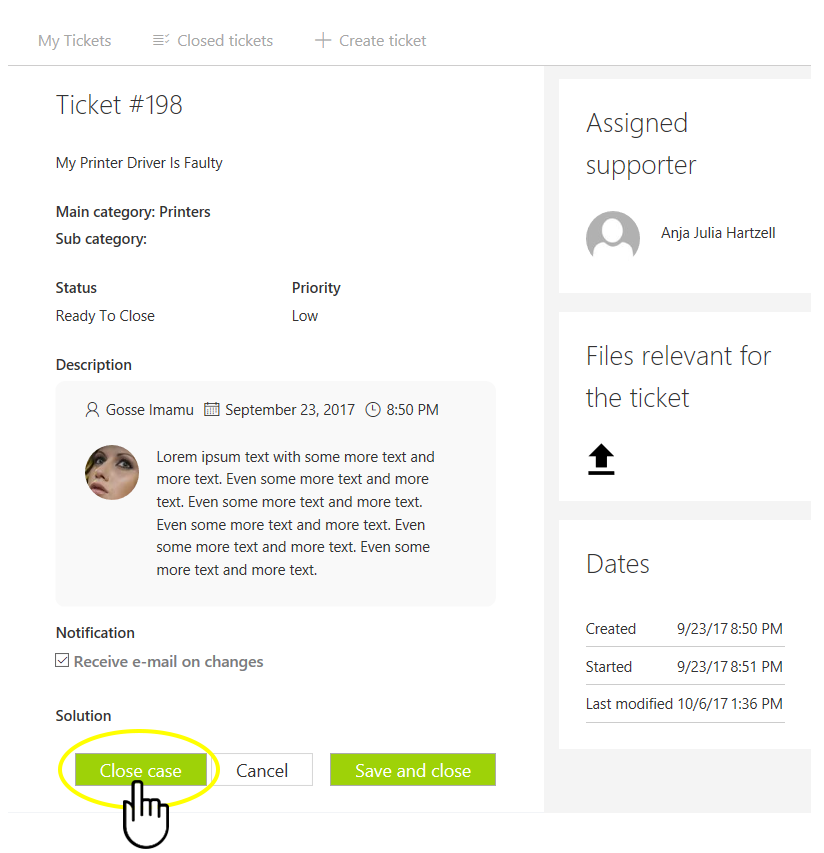 The supporter can, also, close the case e.g. if agreed with the user, or if the user does not respond to the supporter after the case is solved.

After a ticket is closed, the user can access the ticket and its details under “Closed tickets” from the service desk’s landing page.

The service desk from the supporter’s perspective

From a service desk landing page, the supporter is provided with an overview presenting tickets in one or more service desks. 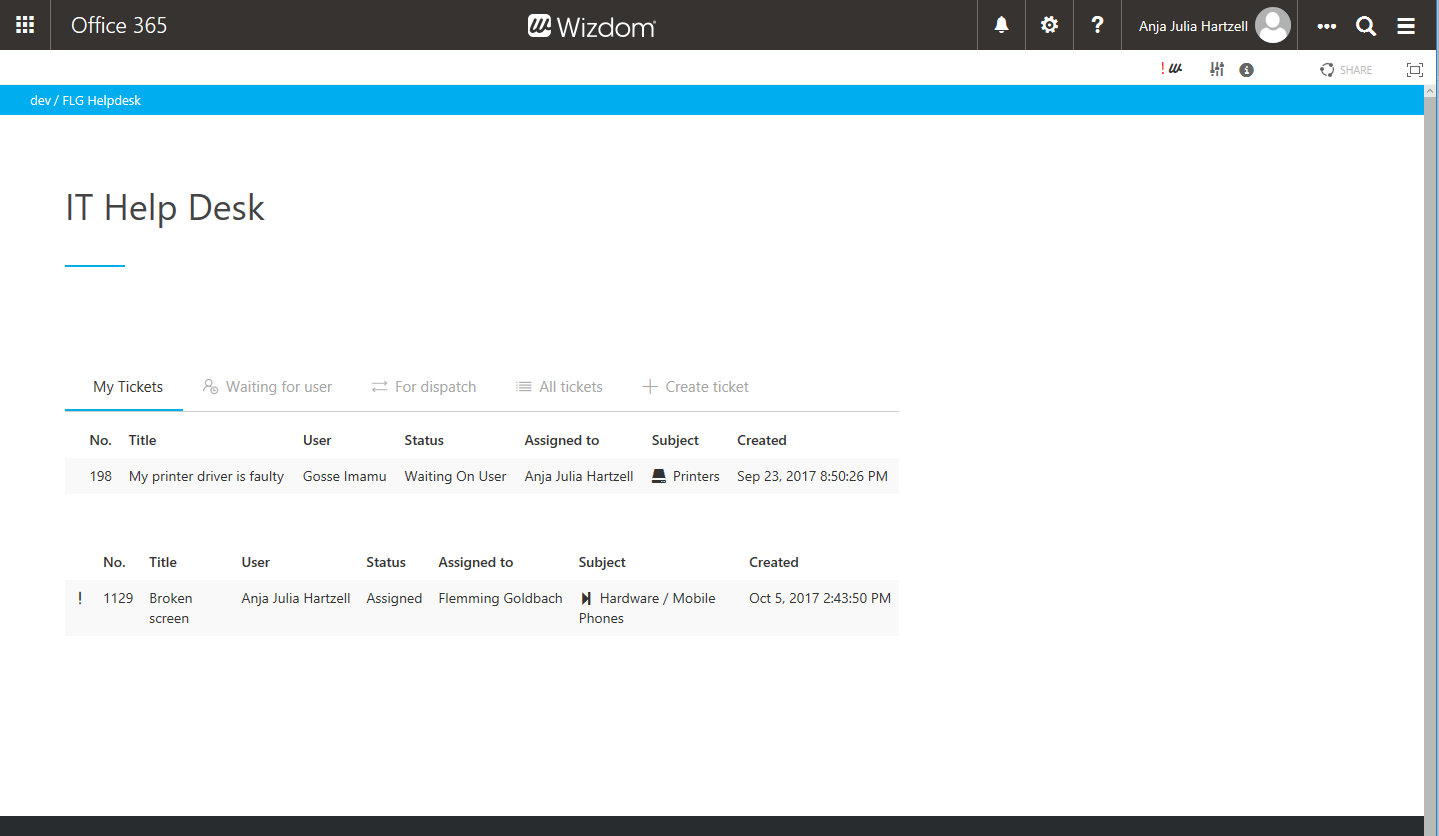 “For dispatch” displays cases that are not yet assigned to a supporter. From here, a supporter with the role “Super supporter” can assign tickets to relevant supporters.

“My tickets” will show the supporter tickets he or she is assigned to. 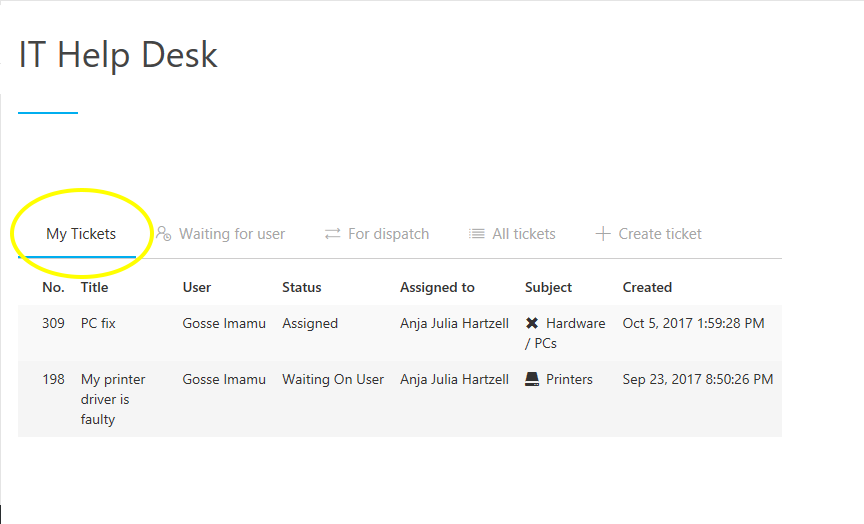 “Waiting for user” will show the tickets assigned to the supporter that are waiting for an action from the user that has submitted the ticket.

“All tickets” provides a list of all tickets submitted to a help desk. Ticking “Also show closed cases” will include closed tickets in the list. From the list, supporters can click into each ticket to access the ticket overview and see all details about the ticket in question.

Finally, “Create ticket” allows the supporter to create a ticket in the service desk. Contrary to users with no support role, supporters can create tickets on behalf of other users. 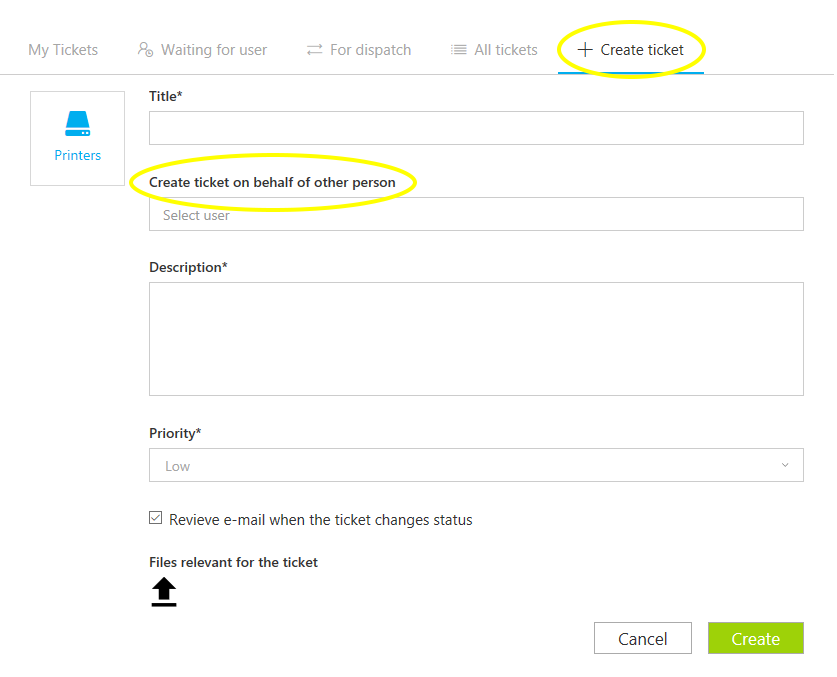 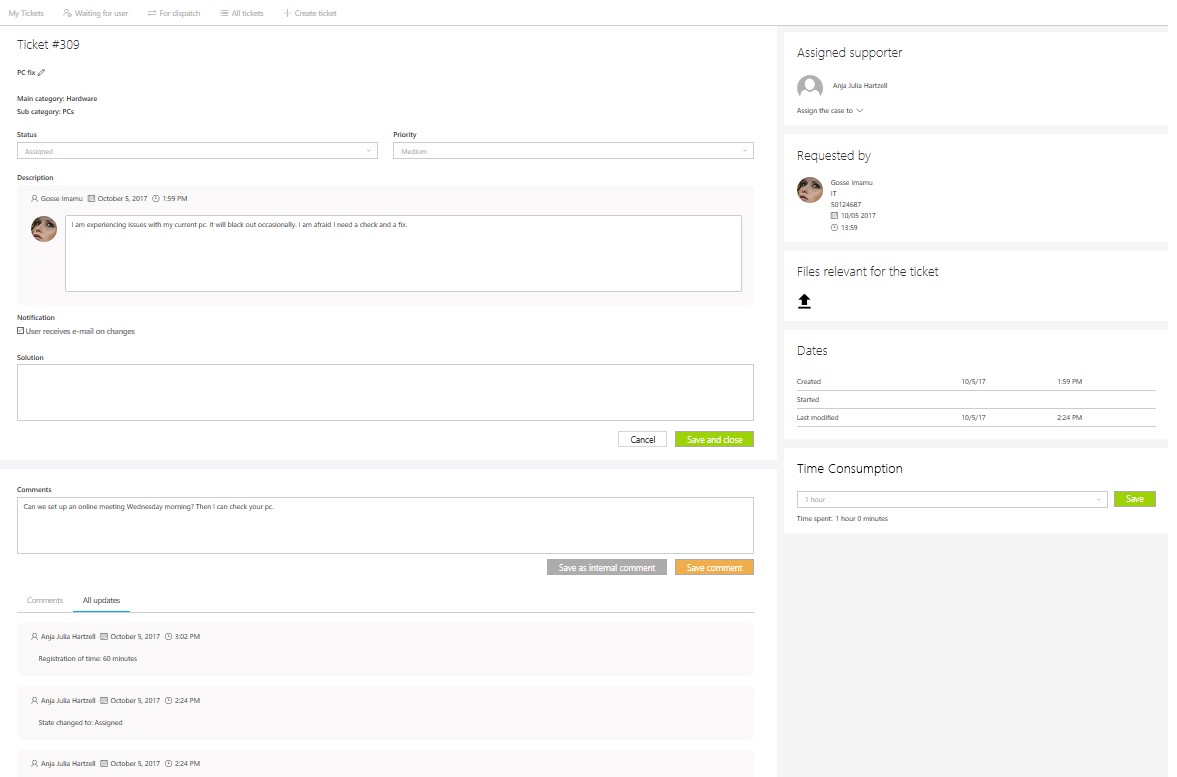 When submitting a request, the user defines the priority of the case to either low, medium, or high. This priority can be changed by the supporter.

To change the priority of a case, the supporter uses the drop-down menu in the top of the ticket overview.

If a ticket is set to “High priority”, an exclamation mark will appear next to the ticket in the supporter’s ticket overview.

Assigning Ticket to Another Supporter

Providing a Solution for a Ticket

Changing State of a Ticket and Closing it

As a case evolves, a ticket will change from different states between created and closed.

To change the state of a case, the supporter uses the drop-down menu in the top of the ticket overview. 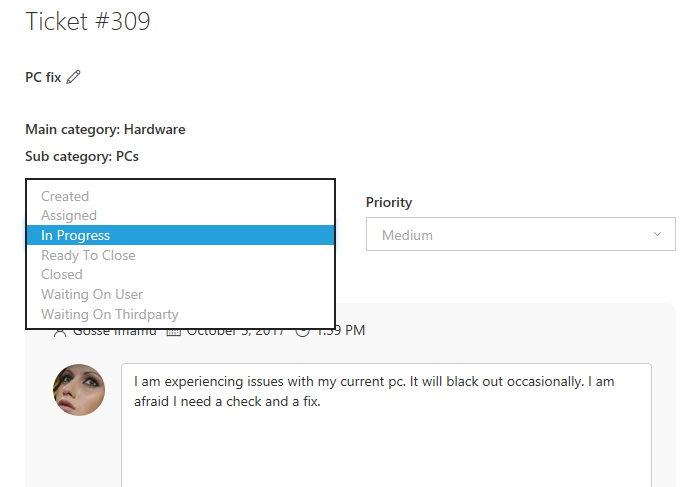 Time Recording
Time recording provides a tool to better understand how much time a supporter takes to solve tickets.

By the means of a simple drop-down menu in the ticket overview, the supporter can record the time spend on each ticket.

States of the Ticket

Created, the initial state of the ticket when it is first created.

Assigned, the state of the ticket when it is assigned to a supporter.

In progress, the supporter has initiated the ticket solving.

Ready to close, the supporter finds the ticket solved and ready to be closed by the user.

Closed, the ticket is solved and closed either by the user or the supporter.

Waiting on user, the supporter is waiting for the user to respond.

Waiting on third-party, the supporter is waiting for a third-party to respond.

In two scenarios, this state change will happen automatically:

1) When the case is assigned to a supporter it will automatically change from “Created” to “Assigned”.

2) When a supporter sends a comment about a ticket to a user, the state of the ticket per default changes state to “Waiting for user”.

In all other scenarios, the states are changed manually.